Anatomy of a Wind Turbine: The Eco-Friendly Power Solution

We imagine your first encounter with a wind turbine was through the window of your car as you zip down a remote highway. Wind turbines are unforgettable because of their large and impressive stature, and are emblematic of the widespread global adoption of this power source as a means to generate more sustainable energy solutions for communities.

Did seeing a collection of wind farms on the side of the road pique your curiosity about the science and technology behind these massive eco-savers? Two IEEE Power and Energy Society (PES) members, Pouyan Pourbeik and Nicholas Miller, explain how wind power technology works, and why it is so important.

What is a Wind Turbine?

In simplest terms, “a wind turbine is a mechanical machine that converts the kinetic energy of wind into mechanical rotational energy that can be used to do some work,” says Pourbeik.

Utilizing the natural resource, wind, as a source of energy production is not a new technological practice. In fact, wind turbines have been developed in various ways for several centuries. Pourbeik says that the first recorded wind turbine dates back to the seventh century in Iran, and was used to grind grain and pump water from wells.

“Today’s modern wind turbines are used to run electrical machines that then convert the rotational mechanical energy into electrical energy that can serve the electrical needs of residential homes, commercial buildings and industry,” says Pourbeik. 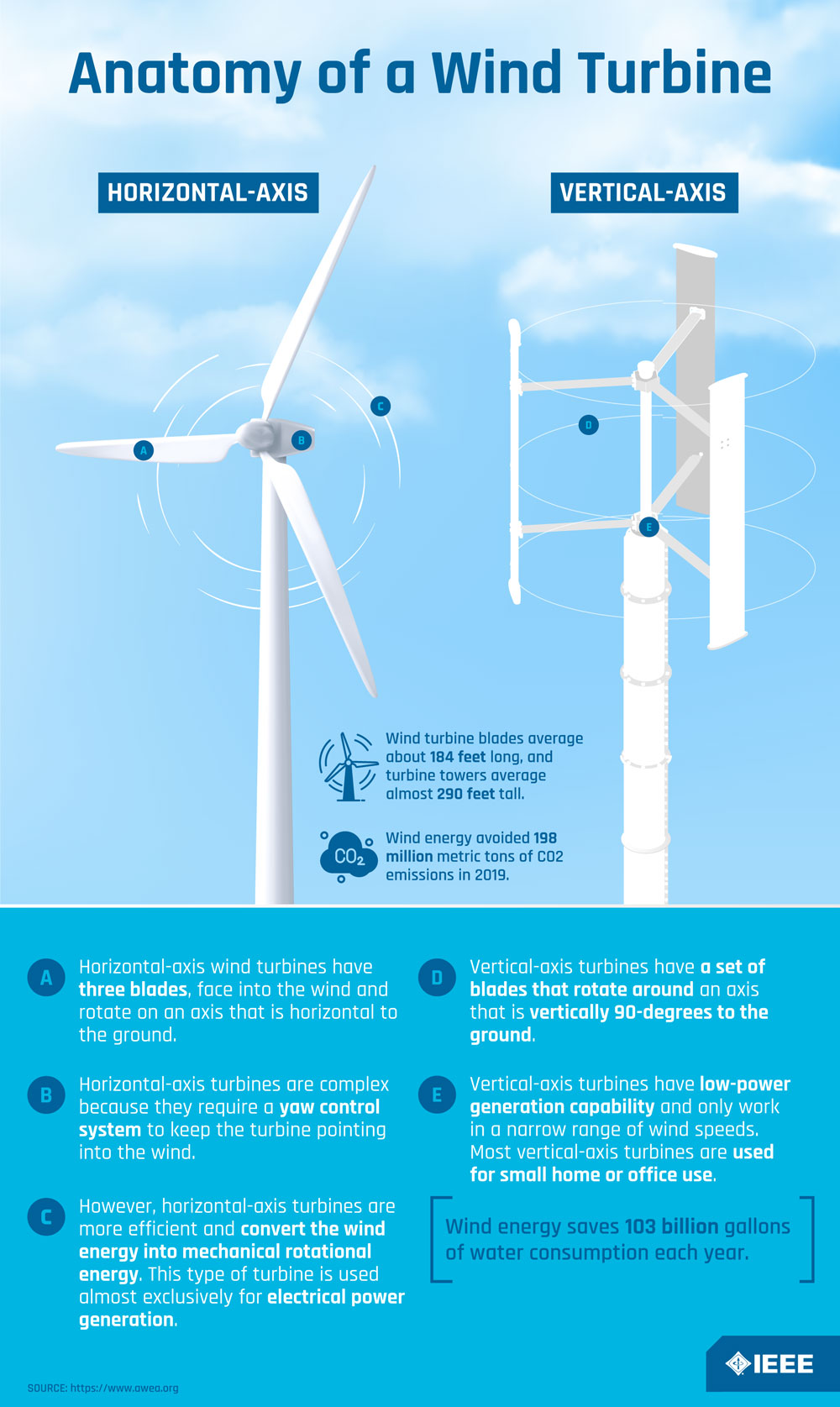 How is Wind Power a Sustainable Technology?

Wind turbines are sustainable because of the power conversion process; by tapping into the wind, the process is cleaner than having to mine or burn material that creates massive amounts of emissions as a result. Wind energy is a solution to reducing those carbon emissions, eliminating other forms of pollution in the air, and eventually moving away from traditional methods that have the opposite effect on our planet.

Another benefit of wind power is that this source of energy is free and bountiful. “When I lecture on wind turbine basics, I often start with the statement ‘a wind turbine is a device that converts the kinetic energy in wind/moving air into money’,” says Miller. “The fact that there is electric power generated is incidental.”

“You can’t afford to build a wind turbine that captures all of the available energy all the time,” says Miller.

What are the Challenges of Wind Energy?

Every technology comes with its own set of challenges that engineers are equipped to solve. Integration into pre-existing power grids and gaining general public awareness of the technology as a sustainable tool are the current hurdles Pourbeik and Miller face as power engineers.

“There are challenges with engineering such systems and reliably integrating them into the world-wide electric infrastructure — but that is what makes the current technical environment in the field of power and energy engineering so exciting,” says Pourbeik.

One of those challenges to the energy grid is energy storage and reliability. Traditionally, when a customer demands electric power, the generation and the power grid is capable of meeting that demand. “But with the advent and explosive growth of wind and solar power, it is Mother Nature who decides when the electric power will be supplied, not the consumer,” says Miller.

“Since the birth of the electric power system in the late 19th and early 20th century, energy has been converted from mechanical energy to electrical energy through the use of rotating electrical machines, which are directly connected to the bulk power grid,” explains Pourbeik. “These conventional machines run at a constant speed, which means that the frequency of the electrical power they produce is also constant.”

Because wind turbine speed is constantly changing due to the wind, power engineers must figure out a way to efficiently convert the wind energy to mechanical rotating energy. The solution is a rotating electrical machine connected to the wind turbine that runs at a wide range of speeds.

“So to interface the machine (running at different speeds) to the bulk electrical power system (which has a fixed frequency) one needs to use a power-electronic converter interface,” says Pourbeik. “Thus, the electrical behavior of the power generating device becomes very different as seen from the grid.”

While power-electronic converters have been used in other ways, they have never been used at such a large scale as they are now to connect the heart of wind power plants to the grid. Over the last few decades, the power and energy industry has been learning how to utilize this technology in the most reliable way possible.

“Pouyan and I have worked through the first stages of the revolution,” says Miller. “Since the turn of the century, we have watched (and participated) as innovations in technology, markets, regulation and understanding have steadily moved the challenge out. Today, we (the U.S. and other world grids) regularly operate at levels of wind and solar generation that we thought would be nearly impossible or wouldn’t happen for decades into the future.”

IEEE PES and the renewable integration community have a large focus on how to make the grid work in a reliable, safe, clean and affordable fashion. But Pourbeik and Miller are hopeful about the future of sustainable energy and the technology being developed.

“We are continuing to move at an astonishing rate, adding innovations on all those fronts,” says Miller. “Very honestly, there has never been a better, more exciting time to be a power engineer. Period.”

Six Priorities for Decarbonization in Industrialized and Emerging Economies

Technology Helps Us Monitor and Clean Up Our Waters