To the Moon: Space-based Infrastructure is Growing Rapidly

Once the realm of governments, satellites are key to navigation, communication, and even cloud computing.

Infrastructure, broadly, can be defined as the set of tools we use to run the world. More and more, those tools aren’t based here on Earth. They’re based in space, where they improve communications, monitor environmental conditions and help us navigate the world around us.

Humans have only been exploring space for a relatively short period of time. But the last few years have seen massive investments in space-based infrastructure for everything from GPS services to communications satellites to weather and disaster monitoring.

Just How Many Satellites Are There?

According to the UN Office of Outer Space Affairs, 1,674 objects were launched into orbit in 2021 alone, a figure that doesn’t include objects that launched into space but are not orbiting the Earth. 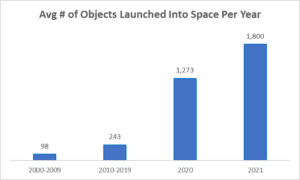 In fact, the number of objects launched into space is increasing dramatically. Between 2000 and 2009, an average of 98 objects were launched into space each year, according to United Nations data. In the decade that followed, that figure more than doubled to an average of 243 objects each year. But the subsequent and most recent two years saw those figures rise dramatically, to 1,273 in 2020, and more than 1,800 in  2021.

More than 54% of U.S. satellites in operation are used for commercial purposes, according to data compiled by the World Economic Forum.

“The advent of commercial space operations has changed the growth curve of space operations,” said IEEE Senior Member Paul Kostek. “Long the domain of nations, space is now shared with companies that fly tourists into space, build satellite constellations, construct space stations and plan their own missions to the Moon and Mars. This transition has come quickly and faster than many thought it would.  The willingness to invest private funds to build space launch capability will continue to expand human capability in space and also will require some planning on how space is managed.”

Private companies are planning to launch tens of thousands of  Low Earth Orbit (LEO) satellites that will be used for internet, observation and communications. That will require greater cooperation among governments, and an update to the UN Outer Space Treaty, which is the only existing agreement managing the use of space.

“The satellites will also have to be monitored to ensure there are no collisions,” Kostek said. “Recently two satellites from a constellation came close to a national space station in development and required action to reduce the possibility of collision.”

Of course, the most common use of space-based services comes from one of the five major global navigation and satellite systems (GNSS) used for mapping and directions on our smartphones. In the U.S. the GNSS system is known as the global positioning system, but other nations have developed their own systems, including China’s BeiDou system, Russia’s Global Navigation Satellite System (GLONASS) system and the EU’s Galileo satellite constellation. Of these, the largest is the GPS, which operates roughly 30 satellites. Each system is also augmented by a number of space-based and ground-based technologies that improve accuracy.

Which is to say that, though most of us rely on GNSS systems, it’s but a small fraction of space-based infrastructure.

Other technologies are emerging. Companies across the world are racing to create satellite constellations that provide internet connectivity and other communications services, like 5G networks.

Satellites have traditionally been extremely expensive. On Earth, companies are using 3D printing to manufacture satellites for a fraction of the cost. A new generation of automated “space tugs” has emerged to deliver and position satellites in orbit for new communications constellations.

“So far, most of the revenues from commercial space exploration relate to goods and services produced in space for use on Earth-like satellite telecommunications, internet infrastructure, geo-referencing services and satellite launch services,” said Raul Colcher, IEEE Life Senior Member. “But there are signs that there will be, in a few years, the explosion of a new space economy, based on products and services produced and consumed outside the Earth. These include space tourism, mining on the moon, new materials, establishment of human settlements, support services and consumables designed to operate in a zero-gravity environment.”

If you are interested in learning more about the future of space travel, check out this video series, a joint collaboration of the IEEE Aerospace and Electronic Systems Glue Technologies for Space Systems Technical Panel and Professor Alessandro Golkar of the Skoltech Center for Entrepreneurship and Innovation.

Satellites: The View From Above, Protecting Infrastructure

10 Uses of AI in Everyday Life

IEEE: A Welcome Home for All Engineers