A Look at Smart Energy and Smart Lighting in Action

Last week we shared an overview of the technologies that allow for smart lighting technology. This week, we’re exploring how human beings can benefit from smart lighting in action. 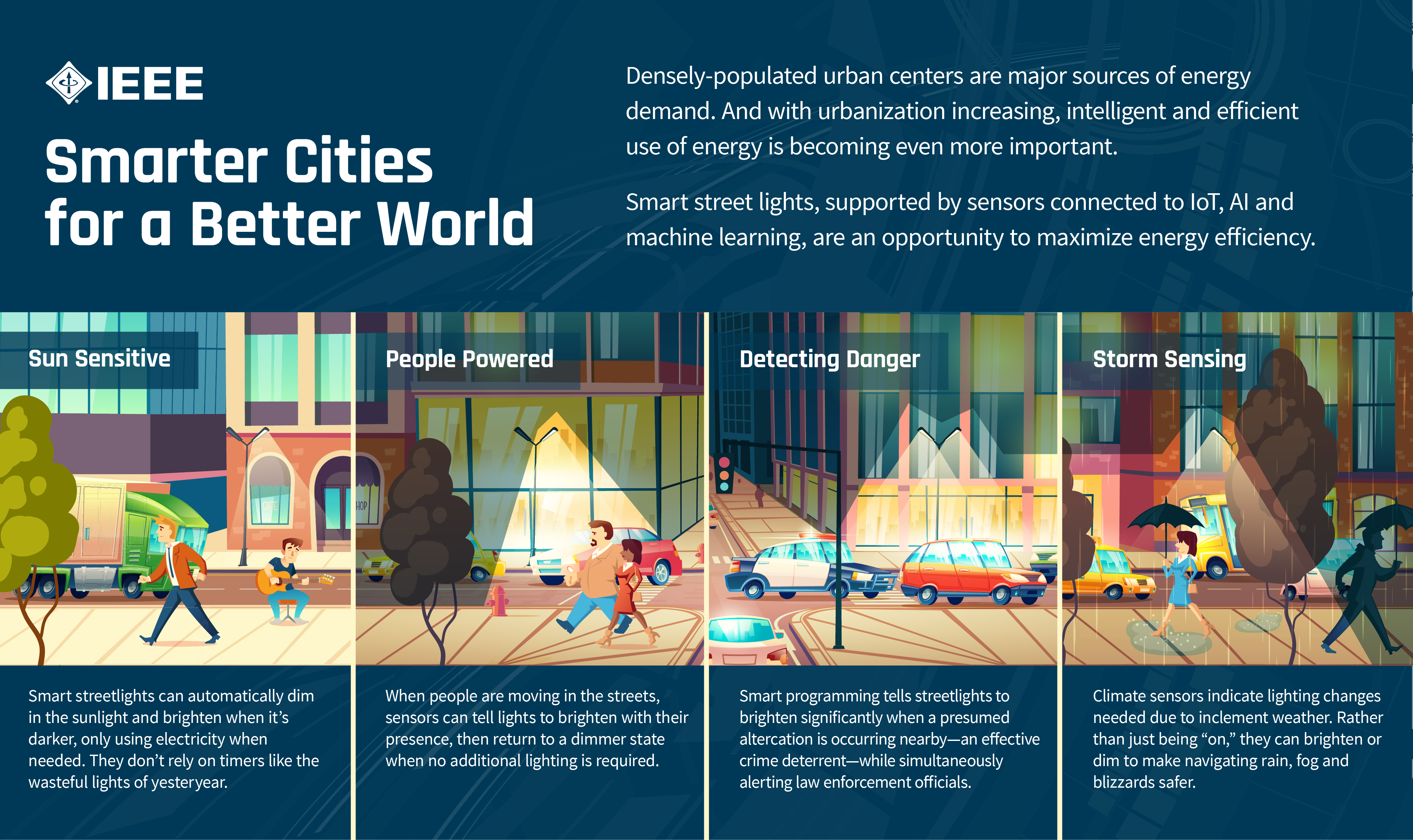 Over four billion people live in urban areas around the globe — approximately 55 percent of the world’s population.1 Increased urbanization over the next several decades, stemming from a variety of socioeconomic factors, has the potential to cause serious problems in energy management and distribution, traffic congestion and more.

To meet the needs of growing urban populations, cities will need to leverage emerging technologies in conjunction with big data to more effectively manage resources and services.

What Are Smart Cities?

Are our cities dumb? No, but they’re not nearly as smart as they could be.

The concept of the smart city has been around for the past several decades, although it’s only recently risen to prominence due to advances in modern technological capabilities. Artificial Intelligence (AI), Machine Learning (ML), the Internet of Things (IoT) and other emerging technologies have made what was once conceptual possible.

“Smart cities rely on technology and data to augment various aspects of urban life,” says Shawn Chandler, IEEE Senior Member. “Physical, institutional, social and technical elements of a city can be improved through the support that emerging technologies provide the public, government bodies and other stakeholders.”

Smart cities focus heavily on improving both the day-to-day and long-term health of urban centers and their inhabitants through improving decision-making capabilities and efficiencies. “Smart cities have the capacity to improve the performance of urban functions, increase awareness and utilization of city resources and advance the overall well-being of citizens,” Chandler added.

Densely populated urban centers are major sources of energy demand, as increased populations directly translate to increases in energy consumption. Thus, a central challenge of life associated with increased urbanization is the intelligent and efficient utilization of energy in terms of management, distribution and sustainability.

As Chandler notes, smart cities seem poised to present an intelligent solution to this challenge: “Smart energy production and utilization – the improvement of efficiencies in existing power generation and delivery mechanisms – enables large savings of both energy and money through the reduction of losses.”

According to Chandler, a key enabler of improved energy utilization is the smart grid, an intelligent supply network focused on detecting and reacting to local changes in energy usage. Supported by the IoT, AI, ML and other emerging technologies, the smart grid has the potential to ensure improved efficiencies and sustainability through the continuous monitoring of utilization and distribution patterns.

“The smart grid, supported by advancements in computing coupled with an abundance of data, will enable improved every-day decision-making capabilities,” says Chandler.

To see the smart grid in action, one need only walk around the neighborhood.

Smart streetlights connected to the broader smart grid are the physical embodiment of the concept of energy efficiency.

IEEE Life Senior Member Raul Colcher says smart streetlights are capable of automatically dimming in the sunlight and brightening when it’s darker, ensuring that electricity is utilized only when needed. These lights are not shackled to the wasteful timer technologies of yesteryear that don’t account for cloud cover and other factors that impact natural lighting.

In towns and on a local level, smart streetlights can be strategically designed to brighten at night, triggered by the presence of individuals requiring illumination before returning to a dimmer state when no additional lighting is required, further saving energy for when it’s required.

Beyond cost savings, intelligent streetlights can also be programmed to brighten significantly when a presumed altercation is occurring nearby – an effective crime deterrent – while simultaneously alerting law enforcement officials to ensure improved civilian safety.

Comprised of the world’s foremost thought leaders in the field, IEEE’s Power & Energy Society (PES) provides the world’s largest forum for sharing the latest in technological developments in the electric power industry, for developing standards the guide the development and construction of energy-related equipment and systems, and for educating members of the industry and the general public on topics pertaining to energy utilization, distribution, sustainability, and more.

Construction Gets Smarter and Safer

The Top 5 Ways 5G Will Build the Workplace of Tomorrow