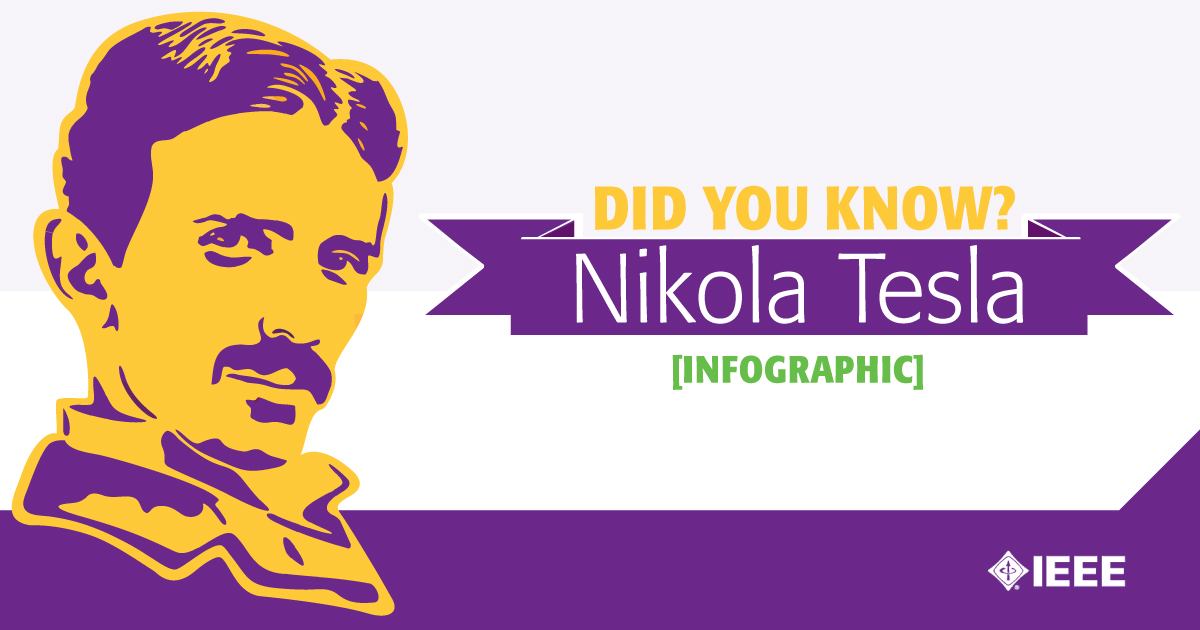 Nikola Tesla is undoubtedly one of the best engineers and inventors of all time. In honor of his 162nd birthday, we’ve put together some facts about his life.

1. Born During a Thunderstorm
Nikola Tesla was born around midnight 162 years ago during a fierce lightning storm. According to family legend, midway through the birth, the midwife wrung her hands and declared the lightning a bad omen. This child will be a child of darkness, she said, to which his mother replied: “No. He will be a child of light.”

2. Discussed Smartphone Technology in 1901
While trying to develop the first transatlantic radio, Tesla in a conversation with his funder and business partner, J.P. Morgan, brought up the idea of instant communication. The science behind the idea involved gathering stock quotes and telegram messages and sending them to his laboratory, where he would then encode them and create a new frequency, which would then be broadcast to a hand-held device. Essentially, Tesla envisioned smartphones and the internet roughly 100 years before they became a staple of our everyday lives.

3. Not Arch-Nemesis with Edison
While most people imagine the relationship between Nikola Tesla and Thomas Edison similar to that of a heated rivalry, in reality that was not always the case. The duo actually worked together and collaborated on designing direct current generators before Tesla left to work on his alternate current theory. Eventually, the two became business rivals that competed to prove whose technology was better. This became known as the War of the Currents.

4. Close Call with Cholera
At the age of 17, Tesla contracted Cholera and was bedridden for nine straight months. He was near death many times and his father agreed to send him to an engineering school if he recovered from the illness.

5. Tesla & IEEE
1888 & 1891: Tesla spoke to members of AIEE or the American Institute of Electrical Engineers (which merged with the Institute of Radio Engineers and became IEEE) at Columbia University in New York. Both times he spoke about his research and experiments with alternate currents and their application.

1892: Tesla was elected as the vice-president of AIEE for two consecutive years.

1917: Tesla received the Edison Medal, AIEE’s highest award, and originally rejected the offer, but was convinced by Bernard Behrend to reconsider and ultimately accept the award.

1975: IEEE creates the IEEE Nikola Tesla Award which is an annual recognition given to a team or individual that has made an outstanding contribution to the generation or utilization of electric power. Its first recipient was Leon T. Rosenberg, for his half-century of development and design of large steam turbine-driven generators and his important contributions to literature. The 2016 recipient was Bruno Lequesne, whose patented work has driven advances leading to the realization of “more electric automobiles” that use electrical and electromechanical systems for improved fuel economy, reduced greenhouse emissions, and better safety.

7. The Radio
In 1900, Tesla patented the design for using his “Tesla coils” to transmit messages over long distances by setting them at the same frequency. Guglielmo Marconi began working on a similar device, but couldn’t get his patent accepted. Instead he experimented with Tesla’s Oscillator to transmit messages. In 1904, the U.S. Patent Office awarded Marconi credit for the invention of the radio. Since Tesla did not have the funds to sue Marconi for using his technology, the result remained unchanged. The patent was later restored back to Tesla after his death in 1943.